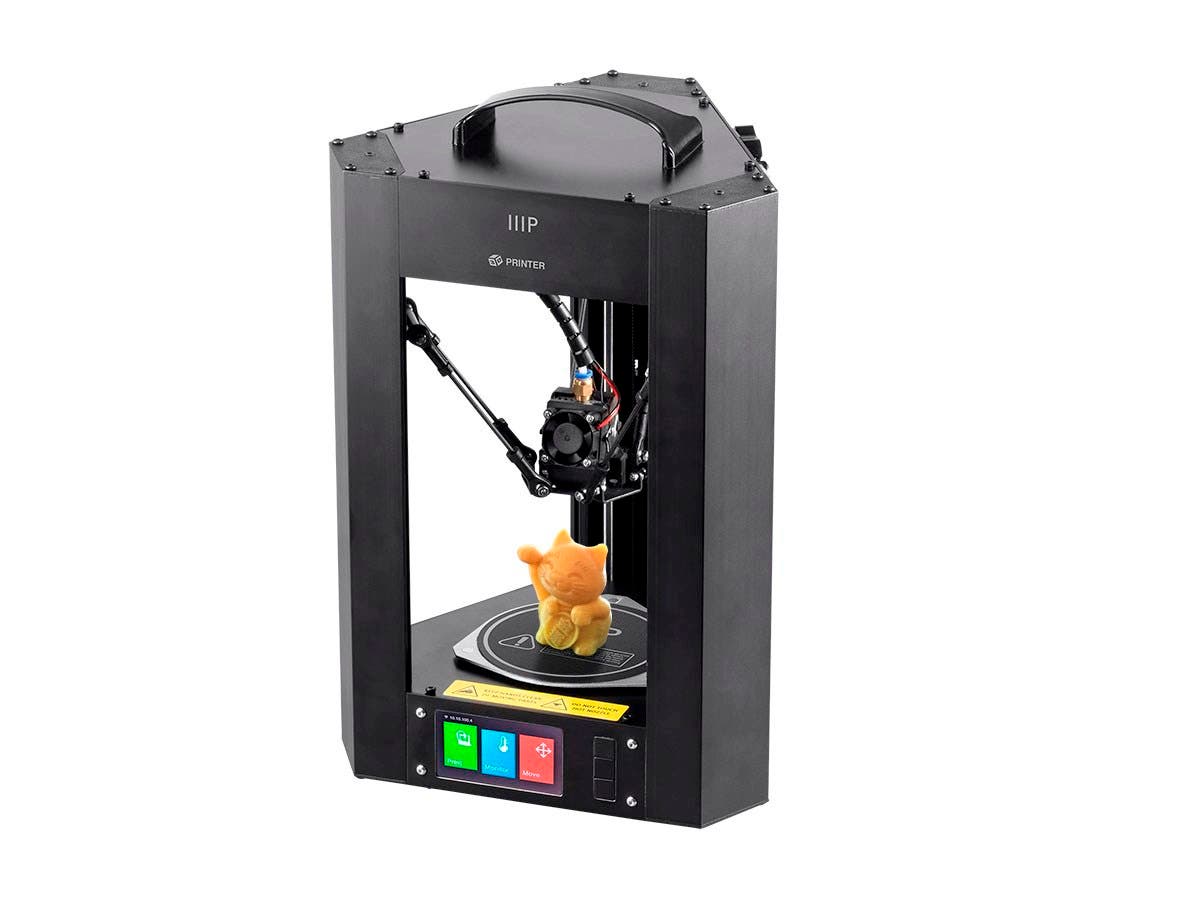 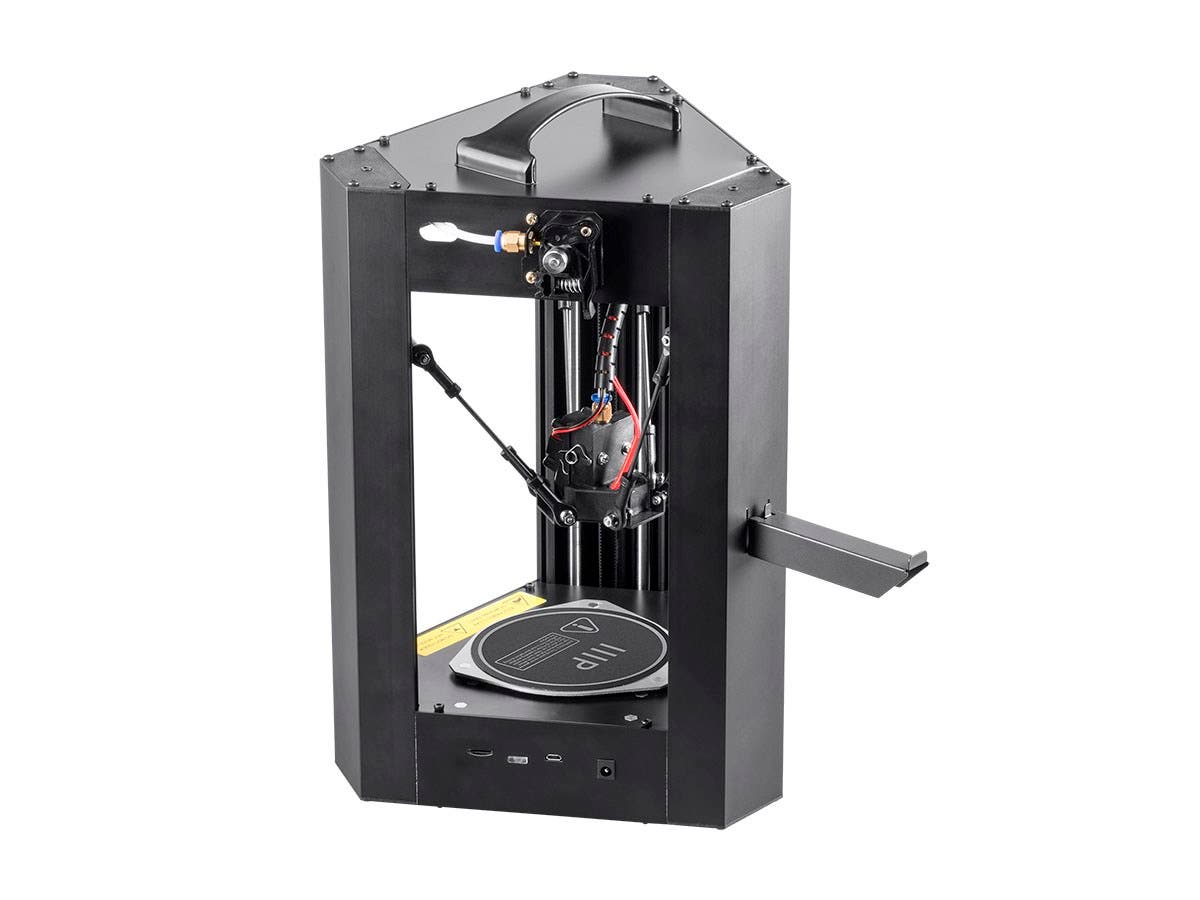 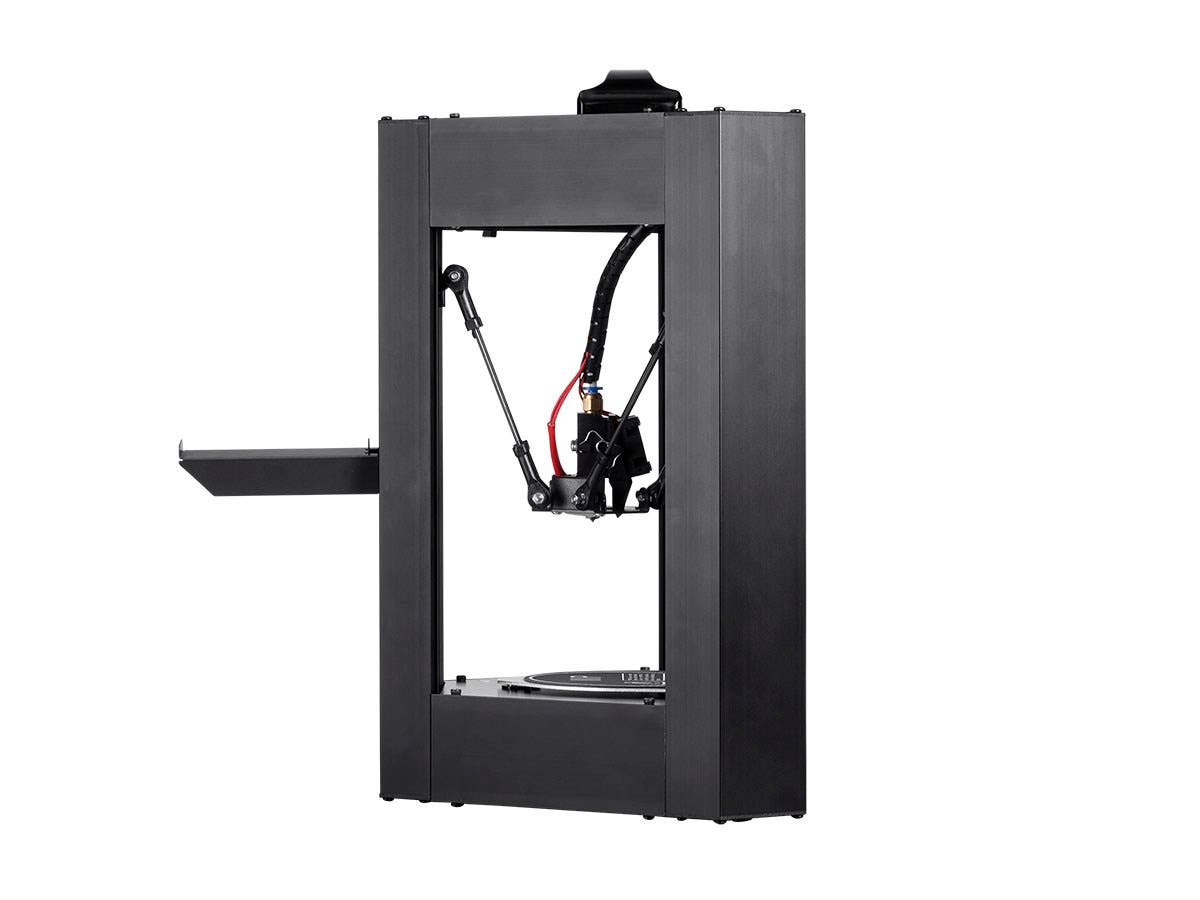 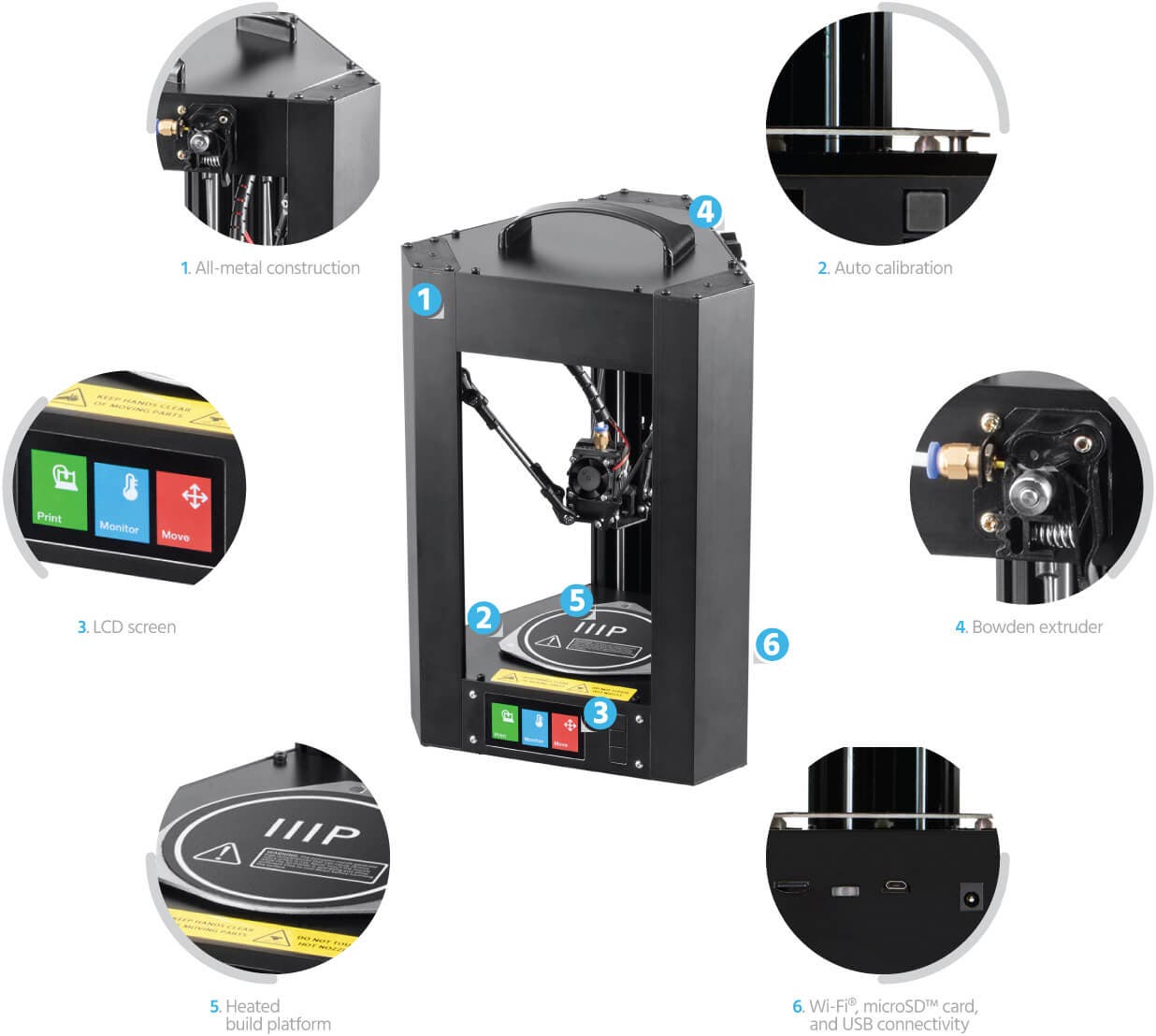 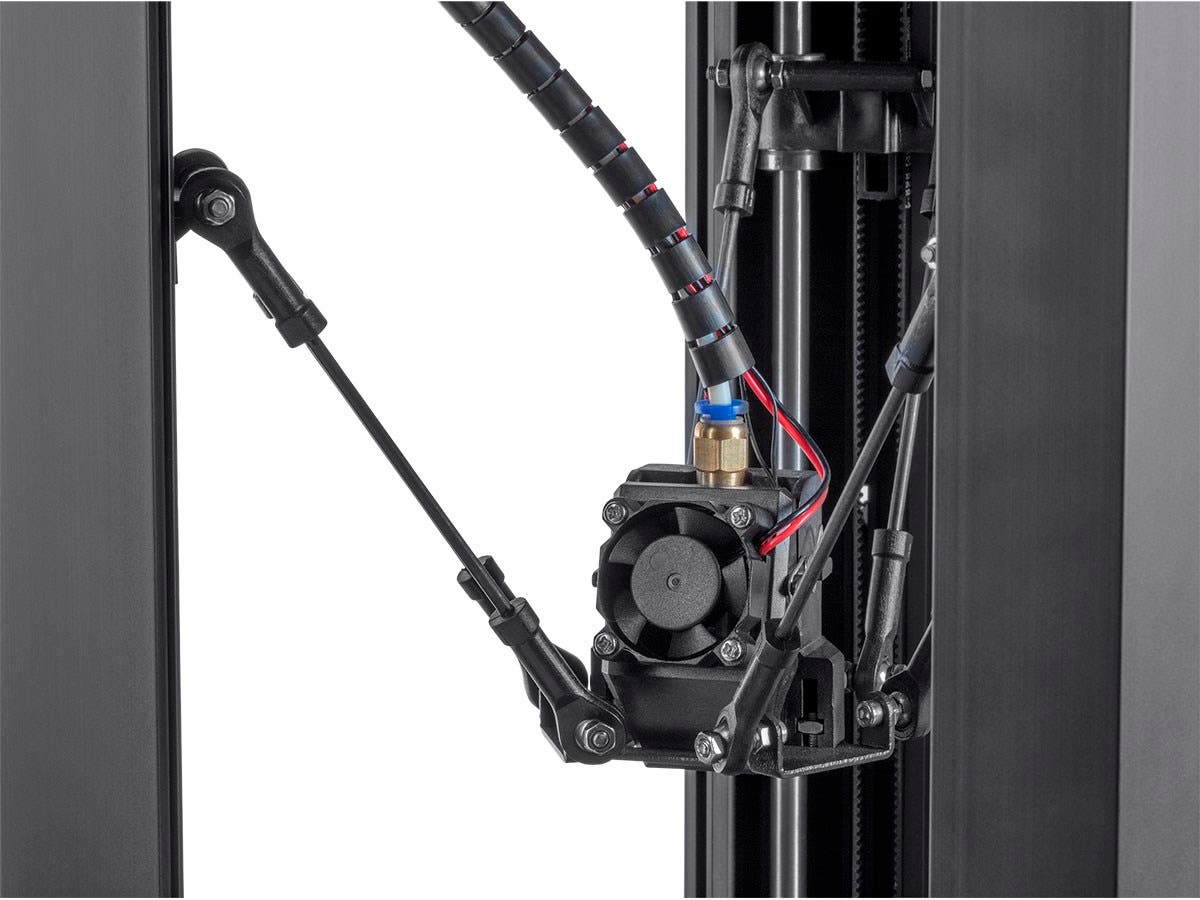 EDIT REVIEW *By editing this review you can attach any link to your website and/or youtube video which will increase your visits!
Unboxing & setup

The great thing about this printer is that it comes fully assembled and it just requires to run the automatic bed levelling before printing. Basically, you can start printing straightforward after unboxing. Once it is powered, the interface is pretty intuitive to guide you through the final setup before printing such us; filament loading and automatic bed levelling. Its small size makes the printer portable with the top handle and quickly to set-up in any place!

The printer comes with:

The Monoprice Select Mini Delta is an FDM/FFF (Fused Deposition Modeling) printer with a delta motion mechanism that makes the printer more rigid. All the motors, gears and belts are hidden behind the metal frame, this makes the design cleaner and solid. However, the printer is not fully enclosed what makes the printing performance not as stable as in an enclosed chamber with controlled temperature. The printer makes use of 4 stepper motors: one to extrude the filament and the other 3 to move the extruder in x-y-z axes at great high speed. The small size of this printer makes it great to be placed anywhere in your desktop.

The aluminium print bed can be heated up to 60 degrees to achieve a better printer adhesion. However, it might not be enough when printing stiffer filaments such as ABS which require high temperatures. The print bed is circular and have an amazing printing volume of 1.14 Liters (R55 x 120 mm).

Regarding the extruder, the filament is pushed into the hotend with a bowden mechanism. This is not the best part of the printer since two problems can easily happen: it tends to jam when you feed the filament (CLogging effect) and the blue bowden coupler is prone to fail(This is hard to replace as it is not standard).

It is important to highlight that the printer is made to be portable due to its compact and small size. It even comes with a top handle to grab the printer with one hand.

The LCD colourful display is placed on the bottom of the printer. Although it can be easily replaced on top of the printer for better visibility and control, it would have been nice to have it on top from factory.

The Monoprice printers use a close source and excellent firmware designed to work with all slider software such as: Cura and Simplify3D. The onboard colourful display is very easy to use providing setup guidance and printer status during printing.

The printing connectivity can be made through microSD, USB or Wi-Fi. Wi-Fi connection is great to make streaming prints from any place on your house. However, users claim that stream printings can be very slow to load.

One of the great features for this very low-cost 3D printer is the automatic bed levelling. This makes each print more accurate and you do not need to worry any more of dis-alignment!

Other important feature, is the hot print bed. Not many printers comes with heated bed for this price.

It is also important to highlight that the 3D printer structure is pretty solid which helps to achieve high quality printings.

Monoprices has not only focused on making many features on a low-cost 3D printer, they have also thought about printing quality. PLA is the main material for this printer! Others filaments might be very hard to print due to the low print bed temperature and the bowden feeding system that leads to have very low retraction causing stringing.

Monoprice has decided to launch a very competitive 3D printer on a very low budget. Do not get fooled by its price, this printer is able to heat the print bed, auto level the extruder and achieve high quality prints. The printer also comes fully assembled from factory what makes it a plug & print 3D printer. However, not all is good about this printer. It is not for a beginner and non-experience users as it requires of tinkerer people to get great printings. Besides that, the print bed is not as good as it looks, it can drive you crazy when trying to remove a print as it is not removable. Nevertheless, there are plenty of improvements that can be applied to this printer, so it makes it a very affordable 3D printer for your own inventions!

Mito3D Search Engine has also looked through all internet to find the best upgrades and modifications to print for the Mini Delta 3D printer. Click this link and check how many modifications users have made to improve your 3D print experience and performance with the Monoprice MP Mini Delta .

WHAT DO YOU THINK ABOUT "Monoprice MP Mini Delta "?
*It is required to provide a ranking value

DO YOU WANT TO SELL 3D PRINTERS?

EDIT AND ADD NEW REVIEWS. CONTACT US AND ADD YOUR SHOPPING LINK HERE!